SERAYAH, best known for her break out role of ‘Tiana Brown’ on FOX, hit series “Empire,” which is currently going into production on its sixth and final season, is not only a talented, beautiful and intelligent actress, but also an incredible music artist. In case you missed it, this past Friday she released the official music video for her latest single “Love It”. Watch the video here. 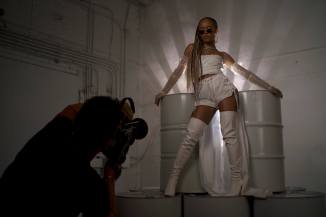 Over the past two years, Serayah has begun to flourish as a music artist, writing and co-producing her songs and videos. Her hot first single “Driving Me,” released in August of 2017, was such an independent phenom that the producers of Freeform’s hit show “Grown-ish” decided to play it in Season 1 of popular series. Driving Me (+1.5M views) had so much traction it garnered radio play in both huge markets in Los Angeles and New York as all well as other major cities across the nation and caught the ears on shows such as MTV’s “TRL” and “Wild’ In Out”. Serayah also dropped her single “So Good” in July 2018, which also left fans wanting more music from the young and talented artist.  Aside from her new music, the accomplished actress, singer and dancer is featured in Chris Brown’s music video titled “Undecided” (+55M Views) displaying her breathtaking dancing and performing skills.

Serayah is a show stopping trifecta of talent in Young Hollywood and has an immense social following of millions and is definitely a “One To Watch” as she keeps soaring to the top on screen and with her music. Serayah is currently working on her first complete solo album set to be released summer 2019 titled “4 Pages” and recently dropped her summer, up tempo dance single, “Love It” on June 14th.