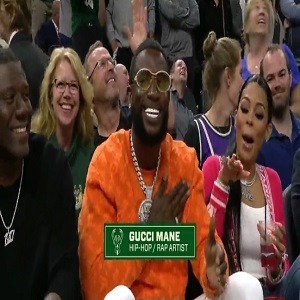 In 2016, Gucci Mane was released from prison, and he completely changed his life. Coming back and making hit records, Gucci went from being a chubby rapper to being #goals and #MCM. That was a huge turnaround.

Gucci Mane had the biggest hit to close 2018, with “Wake Up In The Sky,” featuring Bruno Mars and Kodak Black. The song was memorable and Gucci Mane has spent 2019 chilling. During the NBA Playoffs, he has attended several games.

Being an Atlanta native, Gucci Mane naturally supports the Hawks, but during the playoffs he was at Sixers and Celtics games. After they got eliminated, Gucci has shifted his support to the Bucks. Since Gucci started showing up, in Toronto, the Bucks are 0-3, their first three game losing streak.

On Twitter, fans are now beginning to question if Gucci Mane has a curse, after all, Drake’s antics sparked a three game playoff win streak by the Raptors. Meanwhile, the Hawks are one of the NBA’s worst teams, as Gucci attends all of the home games, the Sixers lost a heartbreaking Game 7, off Kawhi Leonard’s shot, and the Celtics were steamrolled by the Bucks, who are now down 3-2 to Leonard’s Raptors.

Read the tweets about the Gucci Mane curse below: 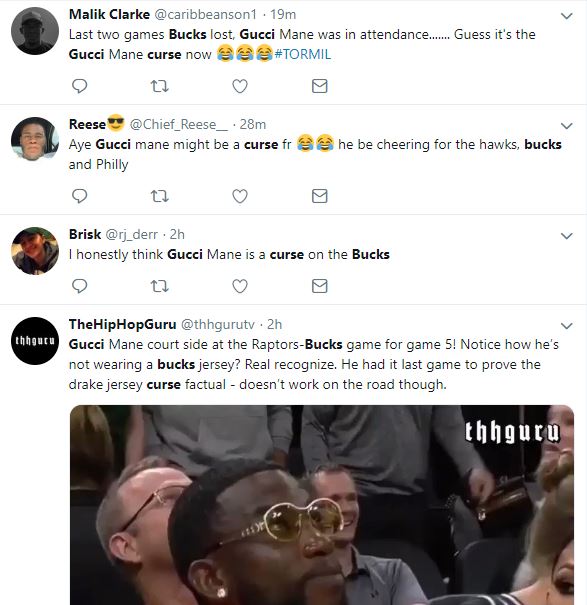 Dwight Howard and ex, Royce Reed, unite for their son’s graduation #BasketballWives #NBAPlayoffs [PHOTO]
Fans are in shock after series goes to 3-2 with Bucks losing their third game after just leading the series 2-0 #NBAonTNT #WetheNorth #TORvsMIL