The vibrant two-piece Tuxedo has amassed their trademark funky soul sound into a brand new party track titled “The Tuxedo Way.” The song is a danceable party anthem with a lively message: life is meant to be lived to the fullest without fear of embarrassment. Lead singer Mayer Hawthorne urges you to “dust your shoulders off and let your hair down.”The track is meant to be a bold celebration of the band’s overall funk energy. “Tuxedo is music for celebrating,” shares the duo. Although their catalog is dynamically energetic, the band realized they’d never produced a feel-good party song in the past; “The Tuxedo Way” was tailor-made to fill the gap.

Perhaps the most impressive part of the song is the production. The attention to minute instrumental details and polished harmonies create a stellar sonic experience reminiscent of Mark Ronson’s early work. The guitar riff alone carries the rest of the song’s undeniable groove.

Tuxedo is composed of Los Angeles-based artist Mayer Hawthorne and Seattle-based producer Jake One. For the past 5 years, they’ve steadily been making a name for themselves at the forefront of a new wave of gangster boogie (born from G-funk and P-funk). The sound is a conglomerate of Cali boom-bap, analog synth bass, and disco that professes authenticity in an era when many try and fail to fake-funk.

Their first full-length release, Tuxedo, debuted at #1 on iTunes’ R&B chart in the U.S. and Top 10 on Billboard’s R&B Albums Chart. Since their beginning, the band has gone on to perform on Jimmy Kimmel Live!, Conan, and NPR’s Tiny Desk; a modern testament to the vast and lasting of soulful music. Their sound is steeped in authenticity, and their upcoming tour is not to be missed. 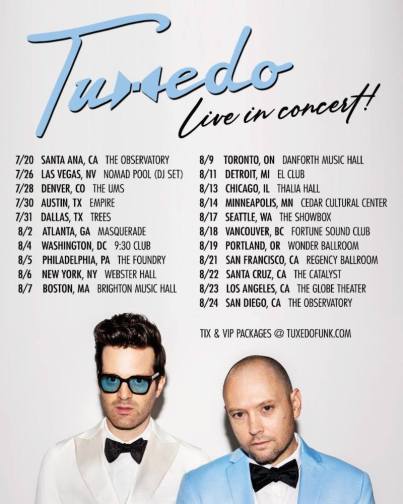