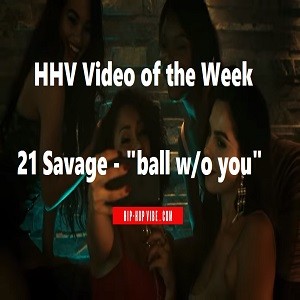 As it currently stands, 21 Savage is easily top five in the game, right now, in terms of popularity. Guys like 21, his “A Lot” collaborator, J. Cole, Travis Scott, Tyga, Blueface, and Lil Nas X are in control, right now. With “ball w/o you,” 21 continues his dominance.

21 Savage first gained the attention of the masses, during the summer of 2015, when his mixtape popularity swelled. By 2016, he was an afterthought, written off as a one hit wonder. But, in 2017, he re-emerged, and became a superstar, not looking back.

This week, the Video of the Week has been relaunched, with more changes coming in the near future. But, 21 Savage is the man who takes it, this week. “ball w/o you” has been trending ever since the video dropped, earlier this week, making 21 a real threat for 2019.