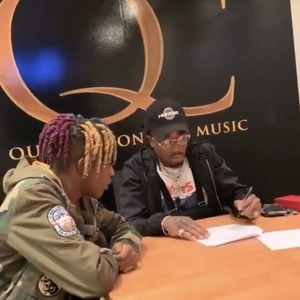 Quality Control Music has produced huge stars since 2013. Among them are Migos, Rich The Kid, Lil Yachty, Lil Baby, and City Girls. Now, they’re adding some even younger talent. They just inked a deal with 14-year-old rapper Street Bud.

Bud posted a video to his Instagram page of him and Quavo signing a contract. It looks like Quavo will be the one who will be mentoring and developing him. Bud has been doing numbers on YouTube with records such as ‘Havin’ It‘ feat. Nia Kay, ‘Ballin‘,’ and ‘Run My Check Up.’

Bud was also the winner of the Lifetime show ‘The Rap Game‘ which Jermaine Dupri and Queen Latifah helped create. Expect some more heat from Bud now as he will be assisted by some of the hottest artists in the game at QC.

Tyler Perry Helps Family Of Atlanta Woman Who Was Killed By Her Boyfriend At A Bank By Paying Six Months Of Rent, Taking Care Of Her Daughter’s College Tuition At Spelman College, And Getting Evans’ Body Back To Wisconsin For Funeral [VIDEO]
Daniel Caesar … WTF is this man talking about, “bridge the gap”? Twitter wants to know; Some are calling him Daniel Ceaser, but him coming for black people “being mean to white people” and them being mean to black people is a “thing of the past” comment has people upset beyond measure with him [VIDEO]