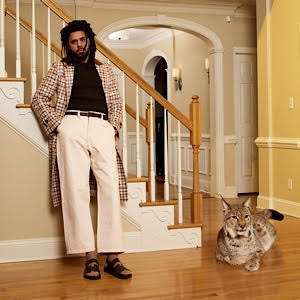 GQ Magazine’s April 2019 cover star is none other than the “MIDDLE CHILD” himself, J. Cole. Accompanied by a dope photoshoot, Cole chops it up with GQ for a rare interview about his career, legacy, and more. The April cover story was released today (March 18th), and features the multifaceted artist-producer wearing a beige robe with his dreadlocks flowing freely as he looks into the camera with a straight face.

In the April issue, “Buck the System,” Cole talks about NBA All-Star weekend, not getting a Grammy, making memories, fatherhood, and being secluded.

When talking about making memories, he reflects on a recent trip to Maui with his family that he took and how he wanted to chill and relax but his wife wanted to go out and site see.

“I never wanna do excursions. It feels like work… It’s like, I ain’t trying to get up at 6 A.M., take the three-hour drive to where we’re going hiking. [But now] I got somebody I care about saying, ‘Come on, like, we need to do this.’ I realize, like, memories come from getting out of my comfort zone—great memories.

“I’ve reached a point in my life, where I’m like, ‘How long am I gonna be doing this for?’ I’m starting to realize like, oh shit—let’s say I stopped this year. I would feel like I missed out on certain experiences, you know? Working with certain artists, being more collaborative, making more friends out of peers, making certain memories that I feel like if I don’t, I’m gonna regret it one day.”

As for not getting a Grammy, Cole is over the hype. Although many of the NC lyricist’s albums went platinum, he has yet to win a Grammy. Although at one point he really looked forward to winning the highly coveted award, he now feels otherwise.

“I’m not supposed to have a Grammy, you know what I mean? At least not right now, and maybe never. And if that happens, then that’s just how it was supposed to be.”

During the interview, Cole touched on how his life has changed since becoming a father.

“For a while, I felt a little weird about it. Like, nah. I felt, ‘Did I miss something?’ ‘Cause I didn’t feel the change that people talk about. And then I figured out what it was..”I changed my life in order to get ready to have a family and to have a son. I literally changed my life, where I was living, the things that I was doing. I changed. So because of that, when my son came, I was ready. I already made room.”

Cole has been known to not include features on his projects since his Grammy Award-nominated album, 2014 Forest Hills Drive. The album made Cole the first artist to have an album go platinum without any features. According to rapper Joey Bada$$, in 2017 he claimed that the ‘KOD’ rapper was no longer featuring artists on his work or giving away features to other artists. However, it seems as though Cole has since changed his mind about this decision as he appeared on 21 Savage’s latest album, I am>I was and Offset’s album, Father of 4. Cole said his decision to collaborate with other artists again came about when he looked at the longevity of his career and not wanting to have any regrets.

“I’ve reached the point in my life where I’m like, ‘How long am I gonna be doing this for?’ I’m starting to realize like, oh shit — let’s say I stopped this year. I would feel like I missed out on certain experiences ya know? Working with certain artists, being more collaborative, making more friends out of peers, making certain memories that I feel like if I don’t, I’m gonna regret it one day.”

Read the profile in full over at GQ.

DMX Takes Us To Church As He Leads The Morning Prayer For Kanye West’s Weekly “Sunday Service”
Young MA tells fans to get off the situation with her and Kodak Black, letting them know she’ll handle it, calling him and the fans weird, again, saying she knows she’s a female, blasting those for making this into a joke [VIDEO]