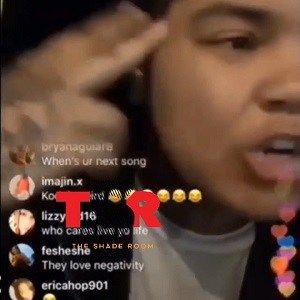 Until Young M.A’s success, conventional wisdom said rappers like her couldn’t make it, on a mainstream level. But, Young M.A proves what real music heads already know, a hit record is all that’s necessary. In the early days of “Ooouuu,” people didn’t know what Young M.A was.

What they did know, however, is that Young M.A was a star. The late summer/early fall of 2016 was all about Young M.A and she remains a big deal. This year has seen a resurgence, of sorts, from Young M.A, with rumors about her with Ari and Bernice Burgos.

In between Young M.A being rumored to be dealing with some well-known women, Kodak Black let it be known that he would get with her, if given the chance. Giving it a few weeks, Young M.A has responded, calling Kodak, and the men egging this on, “weird,” adding that she thinks Kodak is on something, but she’ll be seeing him soon.

Khloe Kardashian, Who Has Used the N-Word And Had 4 Black Women on a Leash as a Costume, Faces Backlash For Promoting a T-Shirt That Says “Love Thy Racist Neighbor” [VIDEO]
NeNe walks out of Eva’s wedding, while she’s exchanging vows (FULL VIDEO) #RHOA [VIDEO]