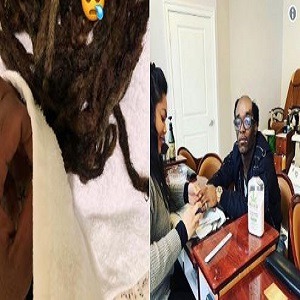 In 2015, Lil Uzi Vert was a rising Philadelphia rapper who was determined to be heard. A year later, he seemingly came out of nowhere, showing up everywhere. His music was all over the place and he was soon a regular on Billboard Hot 100’s top ten.

Lil Uzi Vert definitely was hot, but it didn’t come without struggle. He was signed to DJ Drama’s label, but it was soon very clear that he didn’t particularly enjoy being there. Soon, he was calling out both Drama’s label and Atlantic Records, the big label.

Recently, Lil Uzi Vert retired from the game, simply saying he was done with it. Adding to it, Uzi said that he wanted to release Eternal Atake for free, via SoundCloud. A few days ago, he shared a video, where he cut his hair off, now an image is circulating Twitter, where he is completely bald in the middle, rocking the George Jefferson.

Ella Bands exposes A Boogie for cheating, again, even exposing the girl he was cheating with, blasting him for “cheating with a white girl” ; A Boogie responds, saying anyone who believes her can “eat a d*ck” [VIDEO + PHOTOS]
Kodak Black claims he punched Sticky Fingaz in the face, took his gun, found out it was fake, and that the Onyx rapper then ran off [VIDEO]