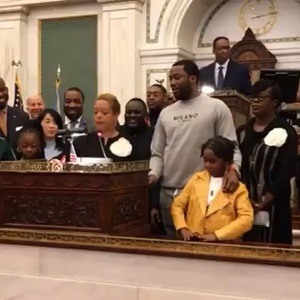 Since the second half of summer 2018, Meek Mill has been on an incredible comeback run. None of this was enough to catch Tyga, who came at the start of summer with a banger. But, Meek Mill delivered solid hit singles, with a classic album.

Meek Mill is definitely the man in his city and that never changed, not even when he and Drake were going at it. Connected with billionaires, such as Robert Kraft, Michael Rubin, and Jay-Z, Meek Mill did a lot of good in his city. Philadelphia never lost love for Meek, having his back.

This afternoon, Meek Mill received the highest honor for his city. The leaders of the city called Meek Mill in to give him his own day. Lauding him for his work, in the community, he now has Meek Mill Day, to add to his legacy.