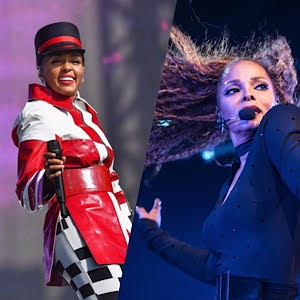 Janelle Monáe has been announced as the presenter for Janet Jackson’s Rock & Roll Hall Of Fame induction.

The Rock and Roll Hall of Fame recognizes artists who have been releasing music for at least 25 years, and Janet’s self-titled debut album was released in 1982 although her breakthrough came years later in 1986 with the release of Control.

Janet Jackson has built a career so groundbreaking that she’s immediately identifiable on a first-name basis. Throughout her career she touched on social issues, themes of empowerment and self-confidence, as well as influenced generations with her stylish music videos and innovative choreography.

Many can argue that this induction was long overdue considering this is her third nomination since 2016 and has been eligible for this grand achievement since 2007. Janet will join her brothers in the Rock Hall. The Jackson 5 were inducted in 1997, and Michael was inducted a second time for his solo career in 2001.

This amazing honor comes after the pop icon announced her first Las Vegas residency,”Metamorphorsis,” back in February with live shows starting in May to celebrate 30 years of her 1989 album Rhythm Nation.

Two more legends from Jackson’s era that are set to be inducted include Prince and Madonna. Other artists slated to speak at the 2019 Rock & Roll Hall Of Fame this year consist of, David Byrne (for Radiohead), Trent Reznor (for The Cure), Harry Styles (for Stevie Nicks), Duran Duran’s John Taylor and Simon Le Bon (for Roxy Music), Queen’s Brian May (for Def Leppard), and the Bangles’ Susanna Hoffs (for the Zombies).

There’s no word on whether or not Janelle or Janet will perform at the ceremony, but either way this will be an iconic moment for both women during Women’s History Month. The Hall of Fame induction ceremony is set to take place at Brooklyn’s Barclays Center on March 29th. The edited version of the broadcast will air on HBO later this spring.

Take a look at Janet Jackson’s announcement below from December of 2018.

We did it u guys 💜 Thank U for all your love and support. #RockHall2019 pic.twitter.com/1APrRJdmTv