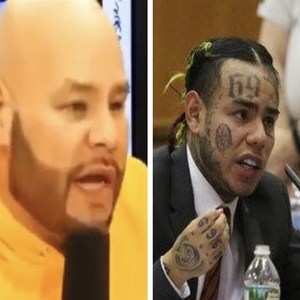 Tekashi 6ix9ine went from facing a life sentence in his federal racketeering, weapons, and drugs case to 47 years and could possibly get off now after snitching on associates in his case along with name dropping who he paid to shoot at Chief Keef in New York last summer. 6ix9ine was originally taken into custody in November of last year.

6ix9ine’s snitching hasn’t sat right with other artists lately. Bobby Shmurda recently said that he’d never make a song with him again after putting out the song “STOOPID” together in 2018. Now, Fat Joe is the latest to cut ties with 6ix9ine. He confessed that he’s not rocking with 6ix9ine anymore on Power 105.1.

Joe used to be cool with 6ix9ine because he thought he was a nice guy but after he snitched, he said that that’s so bad to the point where he can’t be friends with him or come around him again. Talking to the police doesn’t fly with Joe and even said he’d die before you see him in another photo with 6ix9ine.

Check out Fat Joe sounding off on Tekashi 6ix9ine being a snitch below.

Yungeen Ace – “Spinnin” [VIDEO]
Kodak Black jumps into the Gucci conversation, saying he still supports Gucci, because they never did anything to him [VIDEO]