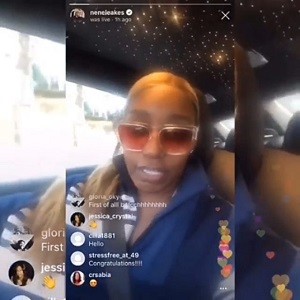 After Sunday’s episode of “The Real Housewives of Atlanta,” NeNe found herself firmly portrayed as the show’s villain, again. In this regard, she has come full circle, going back to her original position. Through the years, NeNe has become a friend, and leader to the girls.

But, the Sunday before last saw NeNe’s patience being tested, when both Kandi and Porsha decided to go in her closet. Then, on this past episode, they tried to explain why they disobeyed her. Everyone knew, though, what NeNe was going through, with Gregg back in the hospital.

NeNe Leakes would unfollow the whole cast, minus Marlo and Shamari, making major headlines. Then, there was the follow up, with her also unfollowing Andy, turning out they never followed each other, and then she called Kandi and Cynthia “weak chicks.” So, NeNe decided to go on IG Live and fully set the record straight.