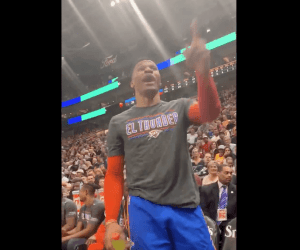 Oklahoma City Thunder superstar Russell Westbrook has never been the one to shy away from confrontation. Whether it be with fellow NBA players, referees.. and even fans. Tonight Westbrook got into a very verbal altercation with a fan while he was on the bench during his game against the Utah Jazz. Westbrook can be heard threatening a man and his wife

NSFW: Russell Westbrook got into a verbal altercation with a fan in Utah: “I’ll f— you up. You and your wife.”
(via @E_Woodyard) pic.twitter.com/vGZCmPktqe

The fan gave his side of the story after the game. The fan initially thought it was playful banter and was taken back when Westbrook got became irate and heated.

Westbrook released a statement regarding the video and altercation. He insinuate that the insults and banter were possibly racially motived. 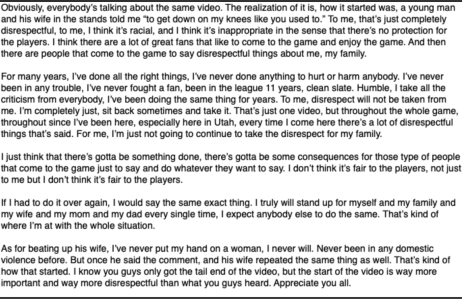