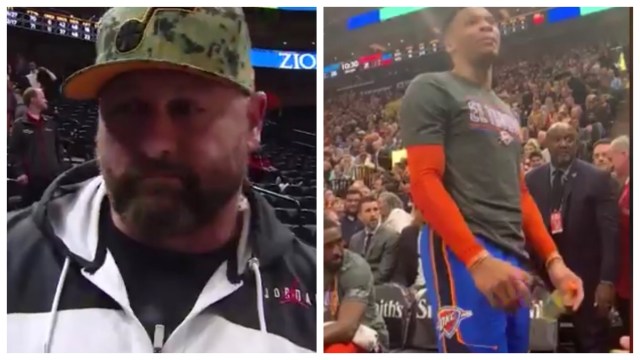 More details surrounding Shane Keisel, the fan who allegedly told Russell Westbrook to get on his knees during a game, are coming to surface. In a post game interview, Shane declares his innocence in the altercation, saying that he and his wife said nothing wrong.

Fans dug up Shane’s social media, and it is not looking good. He allegedly tweeted that Russell needs to go back to where he came from in 2018. He has tweet his support for Donald Trump and his views multiple times. There was even a tweet of him saying the N-word.

Shane better be lucky Russell didn’t follow through with the threat. The NBA needs to protect the players and keep racist and disrespectful fans out of the arenas.

Is this what going to sporting events has come to?!?!

Ladies & gentlemen, we got em pic.twitter.com/LS70y5rler

Ella Bands blast A Boogie, again, this time over him getting upset over her posting sexy IG pics of herself, accusing him of chasing girls that look like this, and telling him to “grow up,” as he seems to break up with her [PHOTOS]
50 Cent has Teairra Mari served with papers, regarding his $30,000 at an airport and Teairra Mari tries to run away #LHHH [VIDEO]