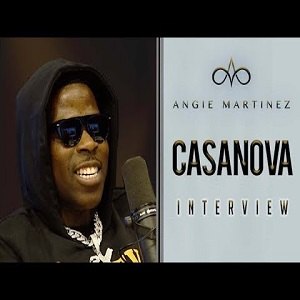 Quite a bit of attention has been given to Roc Nation, since the company was founded. There were so many rumors about this label, including Jay-Z taking the majority of the Def Jam roster with him. While that was untrue, Rihanna did eventually leave Def Jam for Roc Nation.

However, Roc Nation has honed in on homegrown artists. Their first signing was J. Cole, who has become one of the most-influential artists of this decade. Now, Casanova is becoming a standout on the label, though he is signed via Memphis Bleek’s Warehouse label.

Casanova recently stopped by Power 105.1, where he got a chance to talk to Angie Martinez. The conversation was all about Roc Nation, when the interview began. Speaking on NY hip hop, he discussed being compared to Jay-Z by Young Thug, taking 50 Cent’s advice, and more.

A Blast From The Past! Nelly, TLC, and Flo Rida Are Going On Tour For A Flashback To The 2000s
#QueenRadio has officially kicked off in London and Nicki Minaj fans shout her out for her London accent and her “Thotiana” remix, asking if “Barbiana” is the name of her unicorn + RIP stuffed animal Oscar #QueenRadioLondon