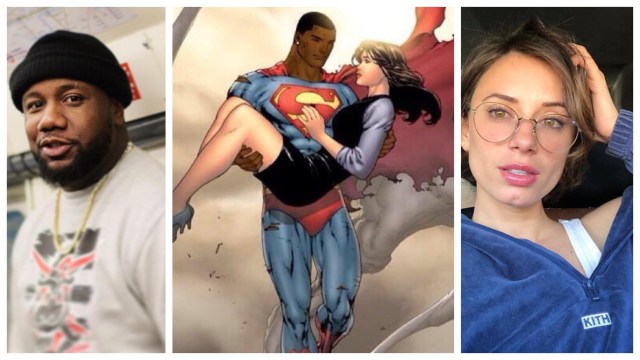 In an interview with proclaimed culture vulture, Yes Julz, Mook was doing the most by saying that he didn’t care if Julz, a white woman, used the N-word. He said “I would be cool with you saying n*gga. Cause I got white friends. I got a bunch of white friends. People don’t like dat. I got white friends that I grew up with, like they don’t even know they’re white. They say n*gga all day.”

If that’s not enough to make you wanna throw up, he also says that Julz looks Spanish to him. In another clip, she simply says “and I kinda thought he was a clown” and you would’ve thought she said the funniest joke in life, because Mook was so extreme with his laugh.

“Pick me” in rare form 🥴 pic.twitter.com/BkZWhxv2qw

Take a look at some of the twitter reactions.

y’all notice Mook (dude on the far right?) changed positions in his chair like 30 times? pic.twitter.com/2f3RjJMVF3

Murda Mook to Yes Julz: "I think you spanish"

that's my time for today

Murda Mook & Biscuit look dumb as hell yall made no points or anything, y’all more focus on laughing at corny jokes and saying “you my nigga” then address the shit she’s said and done THREE YEARS AGO.

Mook going viral for being a uncle tom..😔..whiskey business I tell ya..

Murda Mook during that podcast pic.twitter.com/Z80iDBLUUp

YesJulz blasts Joe Budden for accusing her of buying her butt and then tries to “expose” him over sweatpants, blaming him for her “n*ggas lie a lot” tweet + Joe Budden responds, showing a pic of him in the sweats [PHOTO + VIDEO]
Jesus Take the Wheel…And Drive FAST! Heidi Montag Thinks That ‘The Hills’ is Diverse: “I mean, Audrina has darker hair” [VIDEO]