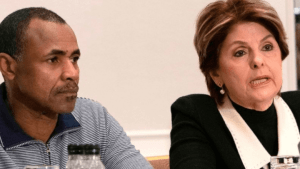 A third sex tape involving R Kelly and under age minors has surfaced. A Pennsylvania man found and turned over the damning video to attorney Gloria Allred. Gary Dennis was cleaning out his video collection when he found what he thought was a recording of R Kelly in concert. However what instead appeared was the singer engaging in abusive sex with under age girls.

In a news conference held on Sunday, Allred stated that Dennis contacted her regarding the VHS tape. She helped him turn it over to the United States Attorney’s Office for the Eastern District of New York.

“Sallie and her husband (Gary) discovered, to their surprise, that they had a VHS tape that could be helpful in learning what had happened to these young girls who came into contact with R. Kelly,” Allred said. “Sallie and Gary felt that they had a moral duty to provide the tape to law enforcement.”

Initially Dennis thought it was a recording of sports game that he got from a friend years ago. That is when the disgusting realization of Kelly appearing to have sex with under age African American girls instead appeared.

“R. Kelly denies that he is on any tape with underaged girls. The doubt here is self-evident, with reporting that the man on the tape kinda, sorta looks like R Kelly. That doesn’t make it him. It is not him.”