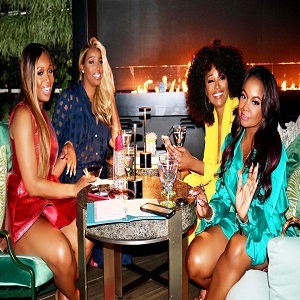 Word on the street is that Phaedra Parks will not be returning to “The Real Housewives of Atlanta,” next season. There has been no official word about her either returning or not returning. However, rumors have been circulating for months.

Phaedra Parks was, however, present for Andy Cohen’s baby shower, last month. This, plus Phaedra posting pics with her ex-cast mates had people thinking she was coming back to the show. Simple photos end up becoming stories that have a life of their own.

Previous rumors have claimed Phaedra was returning to “The Real Housewives of Atlanta.” Fan anticipation was high for that, but now it’s being said that Phaedra is not returning to the show. This is only a rumor, as there is no proof, but word is that Phaedra was overheard, at Andy’s baby shower, telling another “Real Housewife” that she is happy being off the show, and it was “the best thing to ever happen” to her, word got back to Andy, and he nixed her return, but this has not been reported as the truth.

Nicki Minaj is losing her “Queen” status with French fans, who spotted her at Fun Fair, missing her #NickiWRLDTour concert, and they are dragging her on Twitter [VIDEO]
Bobby Brown has lost a tremendous amount of weight, as he shares IG pic of himself at soundcheck #JazzInTheGardens [PHOTO]