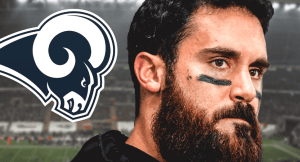 It looks like NFL veteran Eric Weddle still has  some gas left in the tank and is also in high demand. After being released from his contract with the Baltimore Ravens, Weddle was once again a free agent. While the safety has hinted at a possible retirement this offseason, it appears that he will instead take his skills and veteran leadership to a legit Superbowl contender.

The Los Angeles Rams wasted no time going after and acquiring Eric Weddle. The two sides agreed to a two year deal worth $10.5 million with $5.25 million currently guaranteed. The base salary of his contract can reach up to $12.5 million including incentives.

At age 34, Eric Weddle still has a lot to offer from both a skills and leadership standpoint. His ability to apply coverage across the field is still formidable. Even more so, his veteran knowledge and mental experience of the game makes up for any physical lack. In the case of the Los Angeles Rams, this move makes sense. They’re weren’t looking to bring back LaMarcus Joyner, who played on the franchise tag this year. He would honestly just be too expensive. The Rams secondary was a bit of a soft spot in 2018. It definitely showed in the Superbowl. Weddle can help make up for that. In his first nine seasons with the Chargers, Weddle became a two time all-pro. The Utah product also became a pro bowler in each of his three season with the Ravens, racking up 10 interceptions and 220 tackles. In short the beloved veteran can still ball.