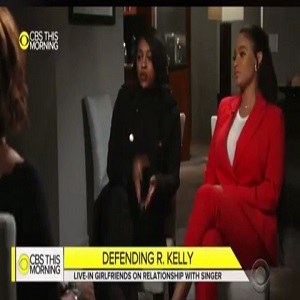 “Surviving R. Kelly” reopened the stories about R. Kelly and the accusations he’s faced, throughout his career. The Chicago singer has withstood the test of time and is one of the only artists still able to sell physical albums. Unfortunately for him, it looks like his time is up.

Joycelyn Savage and Azriel Clary were the centerpiece of the Lifetime documentary against him. According to their parents, the ladies are being held hostage. But, then and now, the ladies have said they willingly live with the singer.

Taking it a step further, Joycelyn Savage and Azriel Clary have followed their housemate, R. Kelly, to “CBS This Morning.” Their sitdown interview with Gayle King sees them defending R. Kelly, while going in on their own parents. The women said their parents told them to lie about their ages to Kelly and wanted in on the money.

Watch the entire interview clips below:

Hmm…Dutchess Shuts Down Claims That She’s Returning to #BlackInkCrew, Even Though The Show’s Trailer Made It Seem Like She Returned [VIDEO]
Lil Duke ft. Gunna – “Petty” [VIDEO]