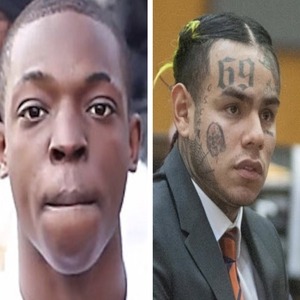 Bobby Shmurda has been in prison for conspiracy to commit murder, reckless endangerment, and drug and gun possession. He’s been held in Rikers Island since December 2014. Shmurda’s mom came out at the end of 2018 saying that she expects him to come home around November 2020.15 associates were indicted with one getting hit with 117 years in prison.

Tekashi 6ix9ine has pleaded guilty to eight charges involving racketeering, weapons, and drugs. He has been snitching on former associates involved in these crimes with him and he went from serving a possible life sentence to just 47 years. After cooperating with the feds, there could now be a chance he walks away with no jail time, according to his baby mama Sara Molina. 6ix9ine also gave up an associate who he paid to shoot at Chief Keef last summer.

Bobby Shmurda was recently interviewed by DJ Vlad about the 6ix9ine case. Last year, 6ix9ine also made a record titled “STOOPID” with Shmurda. After the snitching information was revealed, Shurda wasn’t feeling that at all. He told Vlad that now, he’d never work with 6ix9ine again. He added that this lifestyle that rappers go through has to stop being glorified.

Bobby Shmurda’s name is very much still alive in the industry. He says he will get out in 20 months. Hopefully he sees the same success when he gets out of prison that he did in 2014 with his hit single “Hot N*gga” and his “Shmurda She Wrote” EP.

Check out Bobby Shmurda’s conversation with DJ Vlad about Tekashi 6ix9ine below.