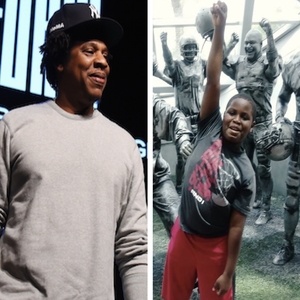 An 11-year-old black boy named Jabari Talbot was arrested on February 4 at Lawton Chiles Middle Academy in Lakeland, Florida after sitting down during the pledge of allegiance. Just like the national anthem, the pledge is viewed as offensive to black people, said Talbot according to Bay News 9. The arrest happened after the substitute teacher had an issue with him sitting.

The teacher’s name is Ana Alvarez and tried to intimidate the child by asking why won’t he just leave the country. Talbot responded “They brought me here.” Now, after dealing with an arrest, Talbot is getting help from Jay Z.

Team ROC is part of Jay’s Roc Nation label and is known for assisting in social justice issues. They found out about Talbot’s case and provided him with a very good and well known attorney in Alex Spiro.

“Jabari is a courageous and intelligent young man who deserves all the credit for standing up for his beliefs,” Spiro said in a statement. “He should’ve never been arrested or entangled in this situation—his freedom of speech rights were clearly protected under the 1st Amendment.” (Via Complex)

Since enlisting Spiro as an attorney, Talbot’s case has since been dismissed. Team ROC also helped 21 Savage in receiving a solid legal team after getting arrested by ICE last month after dealing with an expired U.S visa. Salute to everyone at Roc Nation for looking out for the people who need justice. Jay-Z is also part of the criminal justice reform group Reform with Meek Mill and New England Patriots Owner Robert Kraft.

#rkellyinterview dominates Twitter, as fans react to Robert Kelly telling Gayle King the parents of the women living with him “handed their daughters” over to him and that his past sexual abuse has not affected his behavior (FULL INTERVIEW) [VIDEO]
Breaking: ‘Jeopardy’ Host, Alex Trebek, announces he has Stage 4 pancreatic cancer: “I’m going to fight this” [VIDEO]