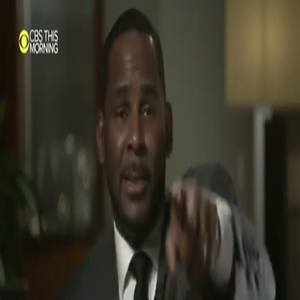 R. Kelly is being charged with 10 counts of aggravated sexual assault involving four underage girls. Sex tapes have been received by attorney Michael Avenatti and he plans to take the R&B singer down. Kelly was also exposed on the Lifetime documentary series ‘Surviving R. Kelly‘ which revealed information about underage women he sexually assaulted over the last three decades with many of them speaking out.

Kelly was recently bailed out by a woman on $100,000 bond. That’s what was needed to pay 10% of his $1 million bond. Tomorrow morning, an interview with CBS’ Gayle King will be aired regarding the case. In a preview of what’s to come, Kelly is seen breaking down into tears while maintaining his innocence.

Kelly thinks that because of what he dealt with in the past, there’s no need to suspect that he’s still messing with underage girls. He shot down any suspicion of recently holding girls against their will and not feeding them.

“How stupid would I be to do that? That’s stupid! Use your common sense. Forget how you feel about me. Hate me if you want to, love me if you want. Just use your common sense. How stupid would it be for me, with my crazy past and what I have been through, now I need to be a monster and hold girls against their will and chain them in my basement and don’t let them eat? Stop it, y’all quit playin’! I didn’t do this stuff! This is not me! I’m fighting for my fuckin’ life!”

A lot of predators never break their horrible habits and that could be the case for Kelly. He’s been exposed as a monster by women for years and hopefully justice will be served. He’s definitely one of the best R&B artists of all-time but this behavior should bring a long prison sentence.

Check out a preview from tomorrow’s CBS interview below. It is set to air at 7AM.

Continue Reading
You may also like...
Related Topics:cbs, r. kelly

Miz MAF – “Brainstorm” | HHV On The Rise [VIDEO]
Papoose celebrates his birthday, one day after he and Remy Ma shared the birth of “The Golden Child” on last night’s “Love & Hip Hop” #LHHNY [PHOTO]