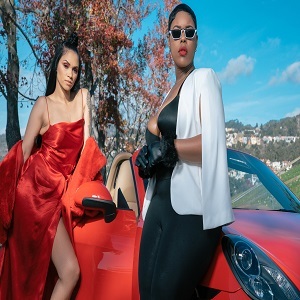 By Stranga The Great
HHV On The Rise Lead Writer

Several artists have the Bay Area hot, on a mainstream level. Every few years, the Bay rises to the top, last enjoying a run in the 2013-2014 period, before this run. On the scene is Andrezia and Plane Jane, hoping to extend this current 2017-present run, long into the future.

Andrezia and Plane Jane currently have the local scene locked down, with their single, “Wettest.” This record has also performed well, with the streaming numbers. The track has turned heads and now they have the full project in store.

Recently, Andrezia and Plane Jane took time out to speak with the HHV team for an On The Rise interview. These ladies are making noise and could soon be having a national impact. During their interview, the ladies spoke on their collaborative work and how they are making Bay Area history.

At a time like this, when the Bay Area is returning to the forefront, how does it feel to be coming up on that hip hop scene?

“It feels like a brand new air that I’ve never breathed before. It’s an amazing time to be an artist and being from the bay is an added bonus. We have such a heavy influence in the music industry and I’m honored to be one of the artists from here that is respected for my craft and emerging to the forefront”

“It feels great. There are so many Talented and creative people that rise out of the bay I’m just happy to be a part of it”.

How old were you, when you arrived in Oakland?

“Although I’ve never lived in Oakland I went to jr high school in West Oakland. I have a deep rooted love for the town but I’m 1000% from Richmond CA. Lol. My city is my heart.

Exactly how did you two link up?

“We met at my producer, Starski’s, wedding. We hit it off talking about our passion for music and played our music for one another. We knew immediately we would sound amazing together! Once we recorded our first record we knew we had magic on our hands and decided to record a whole EP and that’s all she wrote.”

What is the biggest different from the Richmond hip hop scene and the Oakland scene?

“The biggest difference between the Richmond/Oakland hip hop scenes aren’t much talent wise. I just believe that Oakland has more musical outlets from studios, to performance/ club venues, radio shows, etc. Even though we have so much rich talent, a lot of artists from Richmond have to travel to Oakland, San Francisco, San Jose and so forth to be active on “the scene.”

Currently, you are promoting your single, “Wettest,” are you both happy with the reception the song has gotten, so far?

“Yes I’m super juiced about the buzz we’re getting, surrounding “Wettest.” Everywhere we go people are talking about it and telling us how dope they think it is! I’m saying to myself, “just wait till they hear the whole project baby!!!’

“It’s amazing to see the response and the smile this record puts on people’s faces, all the love and support we’ve been receiving For Wettest definitely makes me feel like this is going be a hit record”.

You both had pretty solid solo careers, what made you two decide to come together for this EP?

“For a Bay Area female rapper and singer coming together to collaborate on a project is huge and, to my knowledge, hasn’t been done before! Us deciding to make a project together happened very organically. I just thought she was a cool person, but when I heard her music, I knew we would sound great together. One dope song turned into an EP”.

“As PlaneJane said this is something that’s never been done before in the Bay Area, so of course we had to make history and do it! I love working with other talented people, and I knew when I met Jane and after talking all night and sharing our music with each other that we had to Work, So we recorded out first Song “Wettest” together, which came out so dope we had to do a collaborative Project”.

After this project, what do you have coming next?

“I will be dropping a solo project as well. And plans of an all female tour are in the works”.