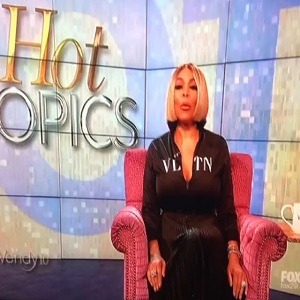 There was a lot of speculation, when Wendy Williams had to take her hiatus. All of it wasn’t just about her personal life, either, as there was talk of her being permanently being replaced. Guest hosts, such as Nick Cannon were floated as replacements, along with Steve Harvey.

Wendy Williams also was dealing with the rumors of her husband cheating on her. Photos circulated the internet that led people to believe that Wendy’s marriage was over. The joke was that her life had now become the “Hot Topic,” but she wouldn’t discuss that.

This morning, Wendy Williams made her return to TV, and she actually confronted those rumors, head on. First, she showed off her ring, letting people know she’s 29 years in, married for 25, and that doesn’t just end, easily. Then, she went into the details, sharing a photo of her and her husband, from the early days.