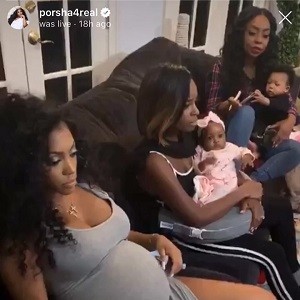 During the previous episodes of “The Real Housewives of Atlanta,” there was a reflection on Porsha and Kandi’s history. Given how things have turned with them, it’s easy to forget how close they were. At one point, they were close to becoming best friends.

However, due to Kandi and Phaedra being best friends, Porsha was also in that mix. Soon, she got closer to Phaedra, and when she and Kandi fell out, Porsha sided with Phaedra. Because of this, she inserted herself into their drama.

The past three seasons have seen Porsha trying to win Kandi back over, only to be rejected each time. This season is the first time where it seems Kandi was also legitimately trying to make peace. It looks like it may have worked, as Porsha shared, on IG Live, a video of her with Shamea, opening a gift Kandi got for her baby.