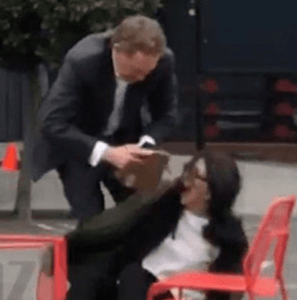 Today San Francisco Giants CEO and President Larry Baer has found himself in the middle of an problematic and inexcusable position, which unfortunately brought his personal life into the public eye. Baer was involved in a physical altercation his wife Pam Baer. Many witnesses confirmed that Baer and his wife were having a public argument at a park in San Francisco. It turned from being verbal to physical when Larry attempted to aggressively pry a cell phone from his wife’s hand. She was sitting in a chair as he was wrestled the phone out of her hand, knocking her down in the down

All of this was captured video by a bystander. Pam was heard yelling, “Oh my god. Help!” multiple times. At one point Larry was recorded walking away from his wife as she repeatedly said, “Oh my god. Oh my god.”

Larry Baer later release a series of statements regarding the incident.

“My wife and I had an unfortunate public argument related to a family member & she had an injured foot and she fell off her chair in the course of the argument. The matter is resolved. It was a squabble over a cell phone. Obviously it’s embarrassing.” 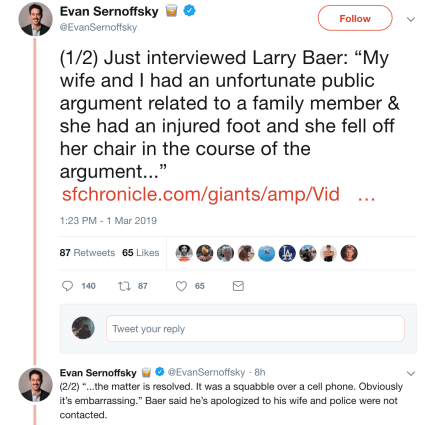 “I am truly sorry for the pain that I have brought to my wife, children and to the organization. It is not reflective of the kind of a person that I aspire to be, but it happened and I will do whatever it takes to make sure that I never behave in such an inappropriate manner again.” 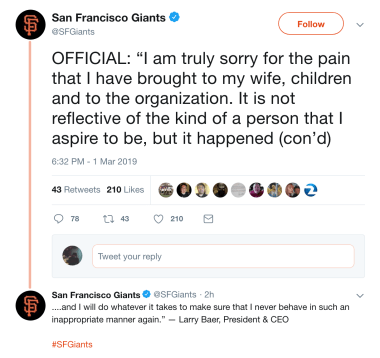 Pam Baer also released a statement through her lawyer.

I would like to clarify the events of today. My husband and I had an argument in public about which we are quite embarrassed.”

“I took his cellphone. He wanted it back and I did not want to give it back. I started to get up and the chair I was sitting in began to tip. Due to an injury I sustained in my foot three days ago, I lost my balance. I did not sustain any injury based on what happened today. Larry and I always have been and still are happily married.”

Two men including the man who recorded the whole incident intervened, separated Larry Baer from his wife. Police were not called at the time of the altercation.

#FreeTristanThompson: Fans take over Twitter and side with Tristan Thompson, over Khloe Kardashian, making themselves #TeamJordyn, celebrating Tristan’s party without Khloe, calling him a “real life hostage,” after learning of how close of tabs she keeps on him
Hawks and Bulls put on one heck of a show, before the Bulls won in 4OT! Twitter reacts to the history Trae Young and Zach LaVine made, both scoring 40 points