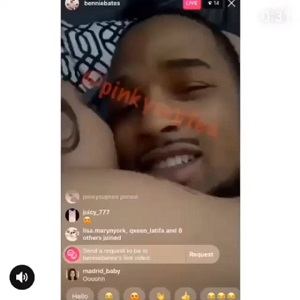 Once all the Tristan Thompson, R. Kelly, and Jussie Smollett drama blows over, 6ix9ine will retake the spotlight. The NYC rapper is reportedly going to be released from prison. Word is that 6ix9ine testified against his own team for his release.

Jokingly, T-Pain said he would have snitched, too, and this led to backlash from his hip hop peers. Most rappers have criminal backgrounds, so snitching is frowned on. While 6ix9ine’s been away, things have gotten out of hand.

The same thing 6ix9ine did with Slim Danger, Chief Keef’s baby mama, it looks like Bennie Bates did with his. Some are denying it, but Bennie Bates is said to be one of 6ix9ine’s old friends. But, she shared a video, on his IG Live, with Sara, 6ix9ine’s baby mama, and she’s kissing on him.