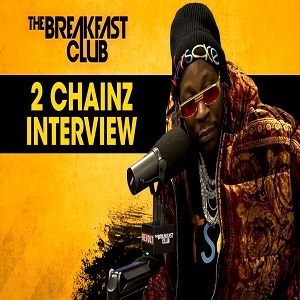 After nearly two years passing since his last album dropped, 2 Chainz had to come back and make some noise. Doing so, he released Rap or Go to the League, and had a unique rollout. The Atlanta rapper partnered with LeBron James and Apple Music for the release.

2 Chainz is currently riding the success of “Rule The World,” his collaboration with Ariana Grande. This song might return him to the top of the charts, where he was, a year ago. Then, he had “It’s A Vibe,” featuring Jhene Aiko, making noise.

Recently, 2 Chainz stopped by “The Breakfast Club,” talking with the crew, without DJ Envy, but Angela Yee, and Charlamagne Tha God were there. The conversation was all about Rap or Go to the League, explaining the content, and the rollout. He discussed LeBron James and how the Ariana Grande collaboration came to be.