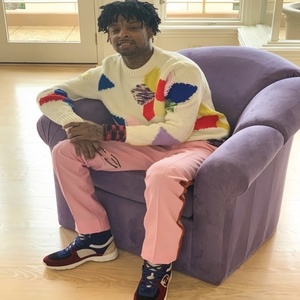 21 Savage is still dealing with his ICE case where they arrested him last month on being in the United States without a visa because he’s a U.K resident. Prior to posting bond, a new warrant was also served for his arrest on a felony theft charge. This was from a club promoter named Sadaetirs Smith. Smith says in 2016, 21 pocketed $17,000 for a performance and then left before hitting the stage. This went down in Hinesville, Georgia at Club Bomaz.

According to the Atlanta Journal-Constitution, The Liberty County District Attorney’s office is isn’t taking on this case as they’re stating that it’s a civil matter. Smith didn’t even want his case against 21 to move forward until after he was arrested by ICE. 21’s attorneys are now saying that this is a “civil contract dispute” in which there are no more warrants out for 21.

21 recently appeared on Good Morning America to come to his own defense about the ICE situation. He felt that ICE was definitely targeting him. As far as Sadaetirs Smith, it’s very unusual that didn’t want to go after 21 Savage for the club incident until after he was taken in by ICE. It seems like a clout chasing move.

Continue Reading
You may also like...
Related Topics:21 savage

Make Up Mogul, Jeffree Star, Adds His 2 Cents About Jordyn and Khloe Drama; Claims There Are More Important Things to Worry About…Yea Like You Saying the N-Word Multiple Times [VIDEO]
@iwriteallday_ blasts Khloe Kardashian for coming for Jordyn Woods, calling other women Tristan allegedly cheated with “Groupon hoes,” leading Groupon to tweet back that they want to be excluded from that narrative [PHOTO]