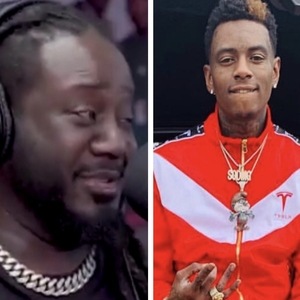 Soulja Boy has been claiming that he had the biggest comeback of 2018 and discovered names such as Chief Keef, Famous Dex, and Rich The Kid. He added that he taught Drake everything he knows but the two have since laughed it off. Soulja believes that he’s influenced every rapper today with him making hip-hop popular on the Internet.

T-Pain has some high praise for Soulja now. During his Real 92.3 LA interview, he labeled Soulja Boy as the greatest artist of all-time. One thing that T-Pain said that Soulja needs to work on is putting out the quality of music to back up the GOAT claim and the way he acts now.

When asked if he will play Soulja’s game consoles, all T-Pain did was hilariously continue to sip on his drink. He added that he’s all for supporting black businesses but the quality has to be there. Check out T-Pain claiming Soulja Boy as the GOAT below.

. @TPAIN says @souljaboy is the Greatest Of All Time 🐐Soullljaaa?!

Continue Reading
You may also like...
Related Topics:soulja boy, t-pain

Tristan Thompson shares his dinner, on IG Story, and a female’s hand has people believing he has already moved onto a new girlfriend [PHOTO]
Dawn Richard Puts BET On Blast After They Tweeted that She’s Following Ariana Grande’s Ponytail Hairstyle – “BET Never Supported My Music Or That I’m A Black Woman Trying To Break Barriers” [PHOTOS]