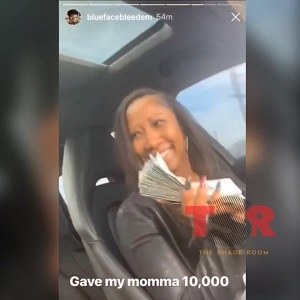 This year, Blueface has been the breakout rap sensation. The LA rapper gained his first major co-sign from YG, who jumped on the original “Thotiana” remix. More are coming, but Blueface also added Cardi B to a remix.

Blueface is enjoying his rise to fame, doing everything he can for his supporters, and for the ones who love him. No one did more for the rising rapper than his mother. Now, Blueface has given her one token of appreciation.

While cruising with his mother, Blueface presented her with a gift. The driving took an exciting turn, when his mom saw what he had for her. It was $10,000 in cash for her, and she was admittedly excited.