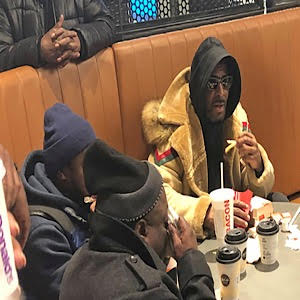 He was released only a few hours after his attorney entered a not guilty plea on his behalf of allegations that he sexually abused a woman and three girls over the course of 12 years. As he was leaving, he walked out to a swarm of media gathered outside of the jail but the “I Admit” singer didn’t say a word as he entered the black truck and drove off.

Shortly after he arrived to his favorite fast food spot, McDonalds in the Gold Coast neighborhood to grab a bite to eat. To no surprise, it seems to be the same place where he’s known to prey on young girls just as it was shown on the Lifetime documentary “Surviving R. Kelly.” Michael Avenatti, the attorney representing someone who claims to be an R. Kelly whistleblower, tweeted Tuesday morning in response to Kelly’s release from jail:

Upon being released from jail on bond, R Kelly promptly went to the same McDonalds that he preyed on underage girls at for years and proceeded to meet and take pictures with underage girls in violation of his bail conditions…

While he was there he received some fan love where he shook hands, took pictures and signed some autographs. Afterwards, he made a second stop to Biggs Mansion – a cigar bar.

As previously reported, Friday Kelly was charged with 10 counts of aggravated criminal sexual abuse and a Cook County judge set his bail to a $1 million, calling his allegations “disturbing.” R. Kelly needed to come up with $100K or 10 percent of the total bail amount to go free and Defense Attorney Greenberg stated that Kelly “doesn’t really have any money.” He had recently been dropped from his label, is behind on rent and owes more than $161,000 in child support. So how was he able to get out on bail one might ask? According to the bond slip, a Romeoville woman posted the bond for Kelly. She identified herself on the slip as a friend of his.

Some argue that she isn’t really “a friend” but that she may be a victim who’s in denial either way, she came up with the money and R. Kelly is out on bail and is now being investigated for criminal failure to pay child support. Stay tuned as we keep you updated as the story develops.

Ari is back with Gervonta Davis, the two refollowed each other on IG, and shared another IG Live video together in bed [VIDEO]
XXXTentacion’s Mom Reveals Photo Of His Son Gekyume; X’s Baby Mama Genesis Sanchez Speaks On Keeping His Legacy Alive With His Son [VIDEO]