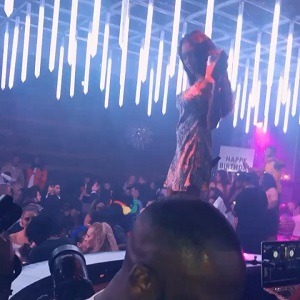 After doing five seasons of “Love & Hip Hop Hollywood,” Moniece announced she was done with the show. But, Moniece seems to be following the trail Erica Mena blazed. Instead of fully moving on, it looks like she might be switching franchises.

Moniece, outside of the show, was spotted on IG with Scrapp, who was on “Love & Hip Hop Atlanta,” back in 2016. He was the ex-boyfriend of the show’s drama queen, Tommie, and Tiarra’s baby daddy. That same year, Scrapp went to prison, to be freed in 2018.

This afternoon, it was reported that Moniece will indeed be remaining on VH1, though. With reports of Tommie not returning to “Love & Hip Hop Atlanta,” Moniece will be filling that role. However, to be clear, she says she is NOT dating Scrapp.

Ella Mai gets dragged by ONE FAN, after she says the current state of R&B is “beautiful,” and this non-Ella Mai fan’s tweet goes viral [PHOTO]
Yandy is so annoying! Twitter really isn’t feeling her, tonight, still with the Kimbella drama, and saying they thought she was going home #LHHNY