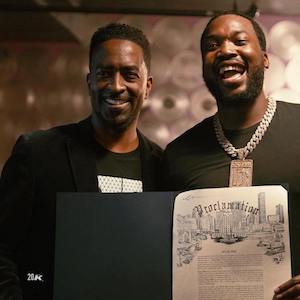 While on tour, Meek Mill has been gifted a day named after him in the city of Houston. During his stop in Houston to a packed house at the Revention Music Center as part of ‘Motivation Tour,’ Meek was honored with an official holiday named after him tied to his efforts in criminal justice reform.

The Philly-bred rhymer was awarded an official city proclamation dubbing February 24 as “Meek Mill Day” in H-Town. While In Houston, Meek stopped by the Harris County Juvenile Probation Department to speak to a group of young boys, to speak about his own life experiences and cautioning the group to learn from his mistakes. Because of this Houston appreciates his advocacy work and wanted to gift Meek with a token of their appreciation.

Meek posted the proclamation, which he seems to have accepted either after the show or backstage. Take a look at the post below.

Black Panther Took Over The 2019 Oscars During Black History Month As Marvel’s First Oscar-Winning Film
Master P talks “I Got The Hook Up 2,” grooming new bosses, and more on “The Breakfast Club” [VIDEO]