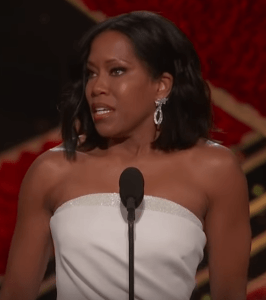 The 91st Academy Awards took place today at the Dolby theater in Los Angeles, California. The Oscars have been known as the most coveted of awards within  the film industry. It’s cultural significance has always held a firm presence within entertainment, media, and fine arts.  It’s usually the last and most prestigious show of the awards season.

The evening got underway in a big way with actress Regina King winning the Oscar for Best Actress in a Supporting Role. She won for her role in Barry Jenkins’ “If Beale Street Could Talk”. The film has been enjoying critical success with both movie goers and industry critics/insiders. It’s been rated fresh on Rotten Tomatoes with 94%, along with a 4/4 rating on Robert &Ebert.

There were a lot of great moments and storylines attached to King’s win.She tearfully expressed thanks to her mom who she credited as her biggest inspiration. She openly thanked God, and praised author James Baldwin for writing the original story. All of this has made her a darling, as she was the favorite to win throughout the awards season.  her first nomination and win. From her humble, yet ground breaking beginnings in Poetic Justice and Boyz in the Hood, King is a three time Emmy winner, Golden Globe winner, and now an Academy Awards winner,  As an actress, director, and prolific producer, Regina King has shown the world why she is a Queen.

Check out her acceptance speech here. 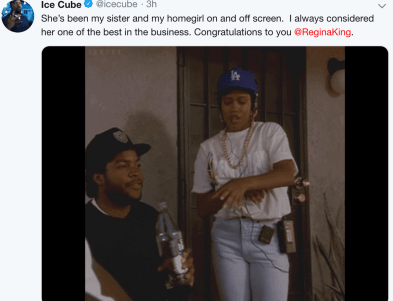