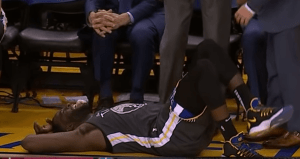 The Golden State Warriors ran into a lot of misfortune in their lost to the Houston Rockets Saturday night. One of them being an injury to one of their star players, Draymond Green. Early in the fourth quarter Warriors power forward went down with a left sprained ankle injury. It occurred when Green seemed to have roll his ankle while playing defense. He stepped on teammates Demarcus Cousins’ foot, immediately collapsing in front of his bench. It looked pretty bad as Green winced in pain right in front of Coach Steve Kerr, who strangely enough, appeared to be so focused on the game’s movement that he seemed to notice his player in pain.

Green did leave the court under his own power. He did not return to the game. Coach Kerr stated that Draymond told him he tweaked the same ankle earlier. in the game. Steph Curry also shared an optimistic update.

He was in good spirits after the game, so I’m assuming it’s not anything serious,” Curry said. “You don’t want anything like that to linger, especially at this point in the season. … Hopefully, he’s not out for any significant amount of time.”

All in all, coaches and players in the organization appear to be enthusiastic about Green’s condition.

Kevin Durant asked about any concern regarding the Draymond Green ankle sprain: “I mean, he’ll be back for the playoffs. That’s the only thing we worry about here, right?” pic.twitter.com/9xiMAOUyXO