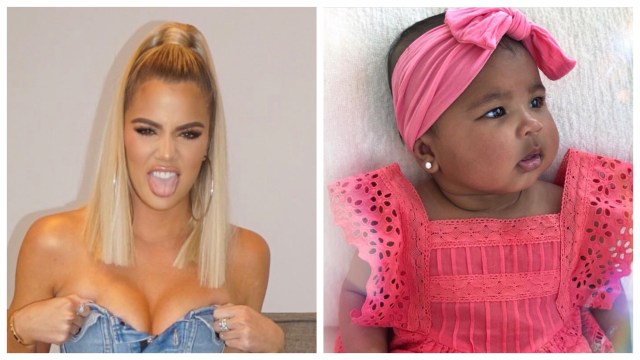 Khloe Kardashian has been clapping back at internet trolls who feel the need to make disgusting comments about the skin tone of her baby, True Thompson. People make comments saying she’s ugly because she’s too dark and it finally had its toll on Khloe.

She took to twitter to defend her baby and shame those that made negative comments about a baby.

I dislike the fact that people are allowed to comment on my daughters skin color but as soon as I comment kindly back and praise her for all that she is, the comment gets erased. If you have the courage to post your nasty criticism please allow one to defend or comment back.

One fan tweeted her saying how he didn’t know how people can have the energy to hate on a baby, in which Khloe replied saying that in her household “we do not see color.”

I try to put myself in their shoes &maybe they were brought up in a different type of household then I was. So instead of shaming I try to educate. In our household we do not see color. We see emotion and action. We see love. We feed off of energy

That’s where it all went left.

Plenty of people had an issue with Khloe saying she didn’t see color. One being, that your child is half black. Your man is black. You should see color. You should see how racism is very alive and well in their country and you should want to use your platform to bring awareness to issues your daughter is already facing, as an infant.

Take a look at what fans on twitter had to say about Khloe not seeing color.

It’s all fun and games fucking black men until you have a black child then you’re forced to see how the world treats black people. Stop saying you don’t see color and prepare your child for her future in a world filled with racism and colorism https://t.co/w8LEf0lTRV

Saying “I don’t see color” when your man and your daughter are black is idiotic. You’re raising a little girl who’s obviously darker than her cousins but you can’t even teach her to embrace her blackness because you don’t “see color” in the first place. https://t.co/yG8OYimRGw

"We do not see color" can also be a bad response. You should be able to see it and embrace it. Let her know that she's as beautiful and as loved as any other girl that's not her race.

Lmao khloe says her household doesn’t see color. Meanwhile, Black men are “the choice” to date in their household and also the businesses they choose to rip off. Lmfao kartrashians are a whole fucking joke.