The recent beef between Bow Wow and Jermaine Dupri have reached high points this year. The two have had much success since Bow was a kid but the tension has been real in 2018 as Bow had a tantrum during the filming of Growing Up Hip Hop Atlanta and also blasted Dupri for addressing their current relationship on a recent Breakfast Club interview.

Bow Wow is now trying to settle things down as he took to Twitter today to apologize to Dupri and everyone else at So So Def for his crazy behavior. He said that he’s been trippin’ and acting like a f*ck boy lately. He said his mind is clear and that he’s now back on track. 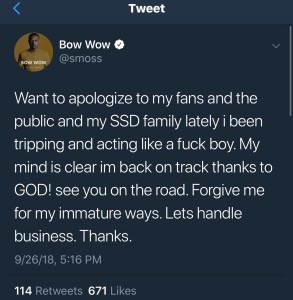 Now that the hatchet’s been buried, it’ll be interesting to see if Bow Wow will join So So Def’s 25th Anniversary Tour after previously saying that he wouldn’t be there. Season three of Growing Up Hip Hop Atlanta will also premiere on October 11 on WE TV.

Continue Reading
You may also like...
Related Topics:bow wow, jermaine dupri, so so def

Parker Mckenna’s Mom Speaks on Her Daughter Being Allegedly Abused by YouTube Star, Chris Sails: “He is trash and when Parker is ready to address things she will do that on her own terms”
Papoose Posts His Thoughts on Bill Cosby’s Rape Case: “I DO NOT condone rape, but I believe he is not guilty”