The viral phenomenon of “Dame Tu Cosita”, continues to be unstoppable and after being the most viewed song on YouTube during the summer, Ultra Records in collaboration with the French label Juston Records released a new version today with the creator of the song, El Chombo, alongside urban superstars Pitbull, Karol G and featuring Cutty Ranks. The song and was produced by El Chombo and The Afro Bros.

“You have the Best of three different musical generations in a song that is becoming a part of history once again, 20 years later” notes El Chombo, the originator of the track.

“We wanted to create a new version that was a full song and still included the alien character and El Chombo,” said Patrick Moxey, Founder and President of Ultra Records and President of Electronic Music at Sony Music. “When Ultra and Juste(Juste MVOUAMA, CEO of Juston Records) presented the opportunity to Pitbull, Karol G and El Chombo, they loved the idea, so we started working with these amazing Dutch producers called “The Afro Brothers” who contributed to the distinctive horn sounds that stand out in this version. “ 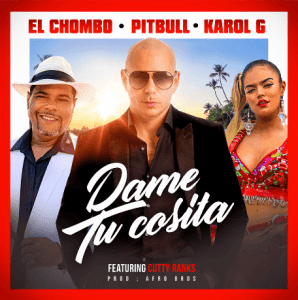 Moxey reveals that this is truly a collaborative production with El Chombo as the protagonist. “It’s exciting because this is a new version with two of the greatest artists in the Latin world today. Ultra has had a relationship with Pitbull for many years, beginning with the success of “I Know You Want Me” and now we’re looking forward to taking this iconic song to the next level. “

On her collaboration on the song, Karol G comments, “I feel very excited to be part of this song as it was one of the first urban songs that I listened to and danced in my life. That El Chombo is in the song gives much more strength to the song because he is the true creator; that Pitbull is on the song is an honor because he is an artist that I have always admired and always wanted to work with, and my participation gave it that sensual and feminine touch that was missing to make this remix a complete success. “

Although it seems unreal, before reaching number #1 on Billboard’s Hot Latin Songs Chart or before exceeding 5 million streams on Spotify, “Dame Tu Cosita” had gone unnoticed for almost a decade, making this not only a success story, but is also showing the power of a classic going viral.

It all started in 1998 when the Panamanian producer El Chombo included “Dame Tu Cosita” in his compilation Los Cuentos de Cripta 2. At that time the song had another name: “Introducción B (el cosita Mix).” Fast forward to October 2017 when a cartoonist named ArtNoux from Madagascar resurrected it.

ArtNoux published a short version video on Dailymotion where a green extraterrestrial dancer appeared whom he called “Popoy”. Soon after, Juston Records caught on to what was happening and decided to  produce the long version of the song and the video which became the #dametucositachallenge on the Musical.ly platform, prompting the audience to imitate the dance, Thus, in record time the video was the number one of that medium, at the same time it became a viral phenomenon in all social networks including Instagram, Facebook, YouTube and more.

Betting on the jocularity and the contagious dance choreography in “Dame Tu Cosita”, took it to the first place of iTunes Dance in 19 markets including Portugal, Philippines, Colombia, Chile, Ecuador, and the list increases.

There is no doubt that now that El Chombo, Pitbull and Karol G unite their unique talents in a revamped edition of “Dame Tu Cosita”, the song will continue to dominate globally on all media and digital platforms.

Legendary adult superstar, Heather Hunter, is a multi-talented personality
Colin Kaepernick Is About To Leave The NFL Shook in Collusion Case; Shall He Proceed? Yes Indeed!