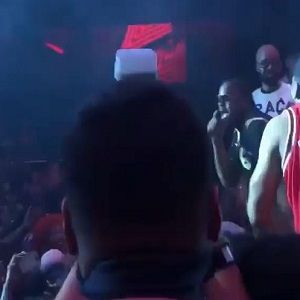 Last night, Jermaine Dupri was celebrating So So Def’s 25th anniversary and all of the biggest names came through. Understand, that whoever wasn’t signed to JD, he was either managing, or producing for. This is a long list of artists, by the way.

The video clips show Nelly, Kandi Burruss, Tamika Scott, and many others, soaking in the night. Meanwhile, Jermaine Dupri had on his nicest suit, receiving props from his peers. There was one artist, in particular, that stood out, though.

Understand that this was a part of his performance, but J-Kwon interrupted the show. He let it be known that everybody was getting mentions, but him. The people really started clowning him, when he let everybody know he had an $800 polo shirt on.