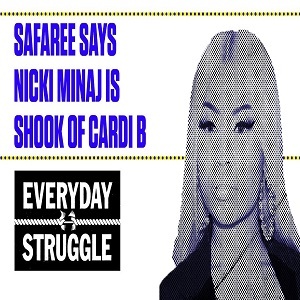 For years, Safaree was just the guy in the background, as Nicki Minaj was taking over the entertainment world. Definitely, Safaree was a loyal man to Nicki Minaj, but every man has a breaking point. Abruptly, during the promo run for The Pink Print, the couple split.

Safaree quickly made his media rounds and offered a response track, telling his side of things. However, it would be another year before he thrust himself into the spotlight. After having a small role on K. Michelle’s show, Safaree took his own spot at VH1.

Three years later, Safaree and his reactions are the face of the “Love & Hip Hop Hollywood” brand. He sat down with Joe Budden and Akademiks for Complex’s “Everyday Struggle.” There, Joe Budden wasted no time asking him about his other Nikki and her situation with Rosa Acosta, before admitting he feels NiCki is shook of Cardi B.