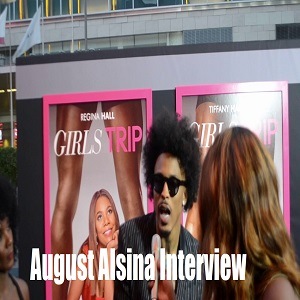 Recently, August Alsina has been at the center of some truly sad news, about his liver illness. But, to talk to August Alsina, it would seem as if he’s the happiest man in the world. Truth be told, the young man does have a lot to be happy about.

In early 2013, August Alsina signed with Def Jam and scored a hit record before the end of the year. Closing 2013 strong, August Alsina took over the game in early 2014. Soon, DJ Khaled put him on some big records, as did Chris Brown and Trey Songz, despite their issues.

August Alsina showed up on the Girls’ Trip red carpet, where he would speak to Hip-HopVibe.com. When talking to @MJThatMediaGurl, he was in good spirits. The conversation was short and about his relationship with Jada Pinkett-Smith, one of the stars of the movie.