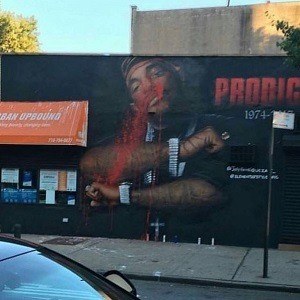 A month ago, Mobb Deep’s one half, Prodigy died, and the hip hop world immediately went into mourning. Through his career, Prodigy’s battle with sickle cell was no secret. Still, that didn’t stop him from being one of the toughest rappers in the game.

In 2010, Prodigy did a stint in prison, where he held his own. When he came out, he had a book about the figures in the rap game. Most of these people took offense to Prodigy’s claims and came back to refute most of them.

Thankfully, most of these people made amends with Prodigy before his untimely passing. A mural was made in his memory, something that should never be touched, but someone decided to deface it. Yesterday, Prodigy’s mural was fixed, but someone has come back to mess it up again.