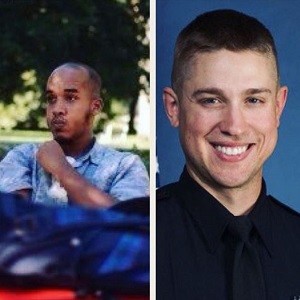 The above photo is the Ohio State University killer (left) and the police officer who shot him (right). Since 11 am EST, there have been stories flooding Twitter of a gunman on campus. Fortunately, he was not able to harm many people.

However, he did give the entire nation a scare, as he did hurt nine people, killing one of them. All day, the man was portrayed as a gunman, but he did not have a gun. Instead, breaking news reveals he only had a knife.

No name has been revealed, as of yet, but the man was twenty years old and an Ohio State student. He was shot, dead, this afternoon by the man on the right. Now, the people of the university and surrounding areas are safe from him.

Read further details on the situation below:

Brandy shades Monica in special message to Whitney Houston after receiving Lady of Soul honor at the #SoulTrainAwards
Footage surfaces of Floyd Mayweather dancing on T.I.’s wife, Tiny, after she claimed she only took photos [VIDEO]