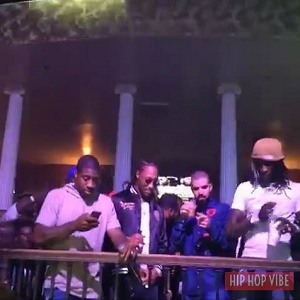 Back in 2011, Future was the much-discussed breakout artist and his co-sign came from Drake. The chemistry the two had was undeniable and they immediately went on tour, in 2012. But, it wouldn’t be until 2015 that their musical peak would come.

Drake and Future delivered many of 2015’s biggest hits, which still get radio play, now. The two are now back on tour, the Summer Sixteen, which is the first time they both headlined. Recently, Drake and Future performed in Atlanta and held the show down.

Hip-HopVibe.com had access to the show and Drake and Future had the crowd rocking. They have been making great music over the past five years and there is much more in store. But, here is some exclusive performance footage of the duo from the afterparty.