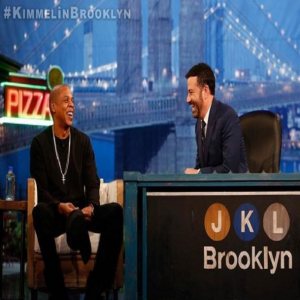 After doing his show, which included amazing performances from his wife, Beyonce, and Nicki Minaj, Jay Z took to the Brooklyn streets. In fact, Jay Z had a treat for the fans. Doing an interview with Jimmy Kimmel, Jay Z invited him and the audience to the concert, free.

Jay Z stopped by “Jimmy Kimmel Live” before the concert to talk about the show. Jimmy Kimmel was already doing the #KimmelInBrooklyn special with his show, so he talked to Jay Z about Brooklyn. During the interview, he also touched on Beyonce, and mostly discussed the TIDAL concert.