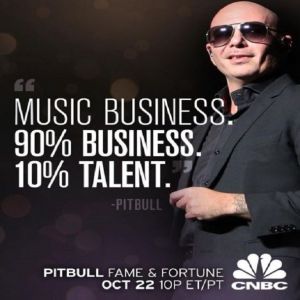 Over the past decade, Pitbull has risen to become one of the biggest pop stars on the planet. The Miami native has worked with many of the most-known hip hop names in the South. His work has helped him become one of the highest-grossing artists in music.

A few weeks ago, Pitbull was on “Empire” talking business with head honcho, Lucious Lyon (Terrence Howard). In real life, Pitbull has made some sound business moves to be admired. Soon, these deals will be chronicled in an upcoming special.

CNBC is doing a documentary special on Pitbull coming up later this week. Named “Pitbull: Fame and Fortune,” Pitbull’s music career and business successes will be noted in the documentary. It airs at 10 pm on CNBC on October 22.

SPOILER ALERT: #Empire season 2, episode 5 ‘Be True’
DJ Khaled BLASTS the music industry, opens up about his fianceé, and talks the best rapper with “Sway In The Morning” [VIDEO]