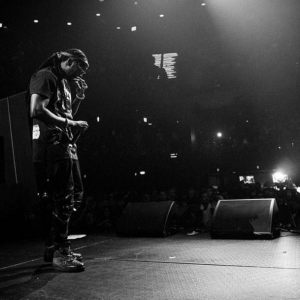 Four years ago, 2 Chainz gained the attention of the mainstream world with his mixtapes. The world knew him as Tity Boi, Ludacris’ trusty sidekick. There was also Playaz Circle and their one hit, “Duffle Bag Boy,” featuring Lil Wayne.

2 Chainz saw his day come in 2012, when Def Jam signed a partnership with him. This led to The Real University becoming an official label, which is now home to Cap1. In addition to this, Kanye West took 2 Chainz under his wing.

The year of 2012 was phenomenal for 2 Chainz, as he released his debut album, Based On A T.R.U. Story. Such singles as “No Lie,” featuring Drake, “Birthday Song,” featuring Kanye West, and “I’m Different” came during this run. On the heels of this, 2 Chainz released B.O.A.T.S. 2 and saw success with the single, “Feds Watching,” featuring Pharrell and some success with “Used 2” in early 2014.

During the spring of 2014, 2 Chainz released an EP, but has been silent since then. There are rumblings of a new album from 2 Chainz coming in 2015, but no official word. But, 2 Chainz has kept a steady supply of tracks coming, none of which have any real momentum, which is leading to some fans in online discussion forums asking if he is relevant in 2015.