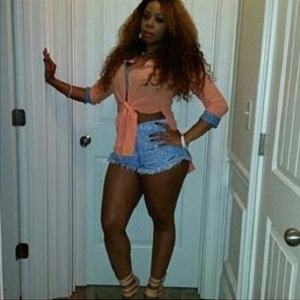 Since 2012, most have associated Shay Johnson with being on “Love & Hip Hop Atlanta” on VH1 and being involved with Lil’ Scrappy. Of course, before that, she also starred in “Flavor of Love” and “Flavor of Love Girls: Charm School” in 2006 and 2007, respectively. During that span of time, she made notable VH1 lists.

Shay Johnson is also a successful model who has a history in this industry well before the TV shows. Enough of Shay has been seen to know that she is a lot of things, but a pushover is not one of them. When provoked, Shay can and will throw down and her opponents should be prepared.

Recently, Shay Johnson hit the club and Momma Dee was visible in the background, but things got tense. There is a video that originated on Worldstarhiphop.com that shows Shay getting up and hitting a girl over the head with a bottle. They claim the woman is a friend of Shay’s co-star, Joseline Hernandez.